The flagship of the Endeavor Line for 10 years straight. The B.O.D. stands for the Board Of Directors; this board is the pride and joy of the people behind the scenes at Endeavor. The B.O.D. has changed identities over the years, and it has emerged as a zero camber, tech laden twin, but one thing remains the same, it still stands as the pinnacle of performance and design.

Its DowTech nose and tail mean there is no pressure on the contact points due to the raised wings, this board feels loose and catch-free like a reverse camber board; however it remains more stable and predictable like a regular camber board due flat kick nose and tail as the effective edge runs further than a traditional snowboard.

Available in the following sizes: 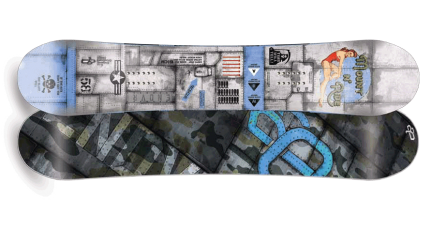